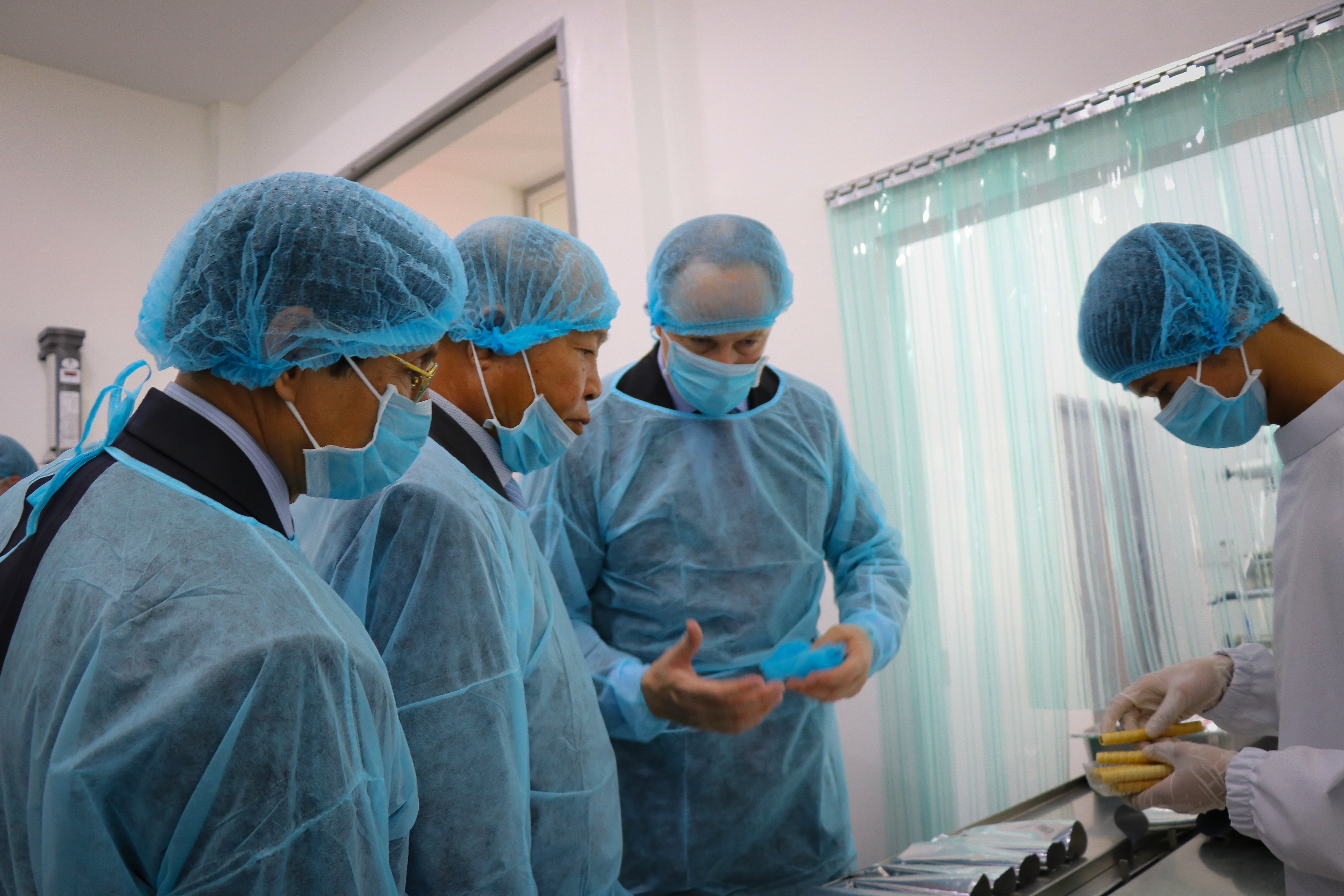 Danish Care Foods (DCF) provides innovative and nutritious products to governmental institutions, hospitals, and national and international organisations that enable these actors to fight undernutrition and progress towards ZeroHunger in Cambodia.

DCF has, through a shared commitment and collaborative work, developed and conducted research on the acceptability and effectiveness in the prevention and treatment of undernutrition. DCF has a long and well-establish research collaboration with UNICEF Cambodia, Fisheries Administration - Department Post-Harvest and Quality Control, Cambodia, Institut de Recherche pour le Développement (IRD), France, and the University of Copenhagen, Denmark. One of the fundamental principles of DCF is to participate in the development of nutritional research, ensuring the products we are developing are highly acceptable and very effective in their purpose. In addition, DCF is actively engaged in obtaining a better understanding of Cambodia's dietary consumption and needs, promoting innovative nutritional solutions, and exploring new products to support the people of Cambodia and neighboring countries.

The partners started the development of a local product back in 2013. Based on experience from Vietnam with developing a locally produced ready-to-use therapeutic food (RUTF), the partners carefully selected nutritious local ingredients such as mung bean, rice, soybeans, sugars, canola oil, and fish. These ingredients were chosen to develop a product adapted to local tastes and preferences. After hours of work, the first fish-based version was developed. In 2014, the first version of a locally produced, a fish-based paste was piloted in pre-school children, assessing the acceptability of the aforementioned paste compared to BP-100TM, and imported milk-based RUTF. The pilot study found that both products had low acceptability, and the local paste did not fulfill RUTF specifications for nutrition composition when tested. An intensive process started with developing pilot products to optimise the local product. For example, a solid cube resembling the Vietnamese 'mooncake' was created. Unfortunately, the solid cube faced challenges with the taste and smell being too fishy and the texture being too soft. The fish-based paste was then re-developed as a RUTF, named NumTrey, in which the quantities of ingredients were modified, and desiccated coconut was added to the paste. The aim was to develop a product corresponding to the nutritional composition specified for RUTF products but replacing milk products with a whole-fish powder.

At the same time, a supplement version was developed to prevent Severe Acute Malnutrition (SAM). A similar paste to the RUTF was formed, which was filled into a crispy, elongated wafer inspired by a local snack. The wafer was made from local ingredients; water, sugar, salt, rice flour, eggs, and coconut. Both fish-based products were made from whole-small, indigenous, freshwater fish species. The fish used were Cyprinidae, e.g. Henicorhynchus siamensis/Trey Riel/Siamese mud carp, Paralaubuca carroini/Trey Slak Russey, Rasbora myersi/Trey Changva muol/Myer's silver rasbora, and Puntioplites proctozystron/Trey Chrakeng/Snail eating barb.

Using the experience from the research, considerable effort was put into further developing the product by DCF. For example, they optimised the production, fish supply, and solar drying process. Also, an emphasis was put on improving the taste and smell (reduce the fish smell and taste) of the product, nutritional composition, and making them more cost-effective. Efforts were made on collaborations and meeting with potential stakeholders, marketing, development of packaging, re-branding the product, and involving local authorities for enforcement and implementing Nutrix in the governmental structure. Finally, Nutrix is used to treat children suffering from SAM visiting health centers in Cambodia.

Research of Nutrix during treatment for SAM.

DCFs product used for treatment – Nutrix - was tested for its acceptability, comparing its effectiveness to a characteristic milk-based RUTF, which is partly used to treat severe acute malnutrition (SAM) in Cambodia. A taste trial was conducted at the National Pediatric Hospital in Phnom Penh among children and their caregivers. The study tested the acceptability of three different products; 1. Fish-based paste, 2. Wafer-filled with fish paste, and 3. A milk-based commonly used bisque RUTF, BP-100TM.

The trial confirmed earlier observations that a lower proportion of children and caregivers ranked the paste product as acceptable compared to other tested ready-to-use products. The same fish-based paste filled in a crispy wafer was acceptable as the milk-based bar used to treat SAM in Cambodia. The full article can be accessed here.

After the acceptability taste trial, a single-blinded randomised control trial was conducted to test the effectiveness of Nutrix compared with a milk-based RUTF in the treatment of SAM among children below 5-years of age in Cambodia (full article is available here). The study found no superiority for either type of RUTF. Irrespective, a locally produced fish-based RUTF (as the unique product Nutrix) is a relevant alternative to imported milk-based RUTF for treating SAM in Cambodia.

Research on the prevention of undernutrition.

The product used to prevent undernutrition was tested in two science-based research studies. First, an acceptability study was conducted using a locally produced fish-based ready-to-use-supplementary food (RUSF) with children under two years in Cambodia. The RUSF was tested as a 'snack' or mixed with white rice porridge (Borbor), compared with 'corn-soy blend plus plus' (CSB++) and borbor with micronutrient powder (MNP). The reputable science authors found that 'although children ate less of the RUSF snack than the other, more familiar foods, the RUSF (whether eaten as a snack or with borbor) provided more energy than CSB++ or borbor fortified with MNP. Moreover, caregivers ranked the fish-based RUSF snack very highly, demonstrating that the locally produced RUSF, using fish instead of milk, is more acceptable to Cambodian caregivers than the commonly used MNP and CSB++'. The full article can be accessed here.

After the acceptability study, the researchers continued their assessments of the RUSF. They hence tested the effectiveness of the local fish-based RUSF compared to CSB++, MNP, and a control group in preventing growth faltering for children under two years in Cambodia (article available here). The authors found that the novel RUSF, particularly in small quantities, RUSF protected against the wasting and underweight seen in the control group, with improved outcomes for WAZ, WHZ, and MUAC.

Whole-blood PUFA and associations with markers of nutritional and health status in acutely malnourished children in Cambodia.

Children with acute malnutrition or stunting had low PUFA, while elevated platelets and monocytes were associated with high PUFA. In acutely malnourished children, inflammation could lead to elevated blood cell counts resulting in increased whole-blood PUFA which does not reflect dietary intake or nutritional status. Link to full study here.

Development and Acceptability of Locally Made Fish-Based, Ready-to-Use Products for the Prevention and Treatment of Malnutrition in Cambodia

Effectiveness of a Locally Produced, Fish-Based Food Product on Weight Gain among Cambodian Children in the Treatment of Acute Malnutrition: A Randomized Controlled Trial

This trial did not find superiority in any of the two products in weight gain (g/kg/day). The trial demonstrated that a locally produced RUTF for the treatment of SAM, produced with small indigenous fish replacing milk as a protein source, might be as effective in terms of weight gain as an imported milked-based RUTF. Link to full study here.

We conclude that projects such as ours, that collaborate to develop and test novel, locally-produced RUTFs and RUSFs, offer an exciting opportunity to respond to both local programmatic and broader research needs. Link to full study here.

Acceptability of locally produced, Ready to Use Supplementary Food (RUSF) for children under two years in Cambodia : A cluster randomized trial.

It is widely accepted that specialized fortified products have a place in supplementing the traditional diet, thereby preventing growth faltering amongst children. RUSF that are formulated as lipid based nutrient supplements are particularly promising as they have a long shelf life and require no preparation. Link to full study here

Crossover trial to test the acceptability of a locally produced lipid-based nutrient supplement (LNS) for children under 2 years in Cambodia: a study protocol.

Based on WFP’s experience and earlier acceptability studies, it is expected that the locally produced Cambodian RUSF will be more acceptable than CSB++ and Sprinkles. If it does prove acceptable, a 6-month efficacy trial will follow. Link to full study here.